Rich is on vacation this week, so we went to the dump today. If you’ve never been to the dump, it’s liberating and even kind of fun.

We have a spare room upstairs that has been a catch-all for many years. Today was the day to get rid of the junk. Rich backed the truck up below the window, and we threw stuff out and into the bed of the truck. The sound of breaking glass was exhilarating. Legal destruction. Computers, monitors, a television … these were the fun things to pitch. Bags of superfluous junk, boxes, old business records? Throw them out the window! I asked Rich if he felt like David Letterman.

The dump (or the landfill if you are more refined) wasn’t the best thing about today. Take a good look at this picture:

Ahhh … the perfect set up for a perfect evening. Today was not a day for the new way of eating. I’ve lost 52 pounds since the beginning of June, and I feel great, but this was a treat day. Yes, that’s a fortune cookie from the Hunan Chicken for dinner. And that’s a high-powered Cola-Cola. Oh my gosh! Caffeine and chemicals taste sooo good! The vintage ashtray filled with peanut butter M&M’s? That’s a gift from hubby. You bet I won’t hold back on those.

So here I sit … on my new deck … happy as a clam and ready to write for the evening. The locust noise has reached about 150 decibels, but I can live with that. It’s a beautiful evening with the temperature at 70 degrees. Justin Timberlake is singing Mirrors on the iPhone, Rich is in a chaise next to me, and the dog is hunkered down beside him. All is right with the world.

I’ve been writing quite a bit lately. I’ve had a hard time not feeling guilty because Susan Hunter has taken a back seat, but I have to write what has been filling my mind – and that is my new series, Two Sisters and a Journalist. … Synopsis: Jo Ravens stumbles across (well, actually she crashes a bicycle on) a murdered girl. It’s the fifth body she’s found in two years. She solved two of the previous murders with the help of her sister, Pepper, and her friend, Jackie (the journalist). Jo enlists them once again to help solve the murder of Peaches, a prostitute from Pittsburgh. Things get a little creepy for Jo when the dead girl comes to her in dreams.

Of course, there is some humor, because I’m simply not that serious. The first few chapters have been run by my mother and my sister, and both have given the book two thumbs up. I’m to the halfway mark at about 25,000 words. I’d like to finish this book within two weeks and then go right to finishing my Susan Hunter book. My goal is to have both ready to publish by the end of October. After that, I’m considering something I said I would never do again – National Novel Writing Month. I can write book number two in the new series in November. I think that sounds like a plan.

I’m taking time this weekend to read blogs, so I’ll be by to see you soon. What’s the number one thing I’ve missed with you while I’ve been gone? If you’re writing, how are things going? Will you be participating in NaNoWriMo this year? Have you had any M&M’s lately? 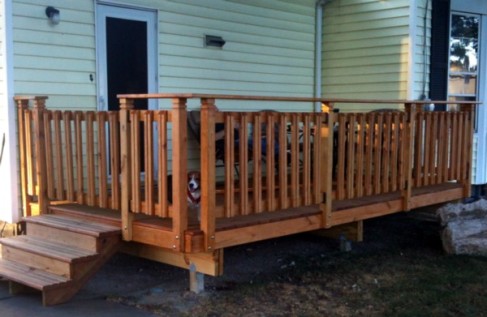 Almost done! We still need skirting around the bottom, handrails on the steps, and the two boulders to the right need to be hauled away – to a dump! The gate at the top of the stairs keeps the dog in and strangers out.