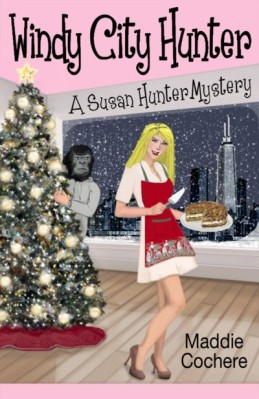 My new book is published! I’m celebrating with a Bloody Mary that has been spiced up with jalapeno dust.

This is the book I wrote in November for National Novel Writing Month. Start to finish, November 3 to December 21, and I squeaked in under the end-of-the-world deadline. I hit the publish button at Smashwords at 8:00 p.m. and at Amazon at 9:27 p.m.

Windy City Hunter is live at Smashwords, and will go live at Amazon, hopefully, by morning. It will be at Barnes & Noble and other outlets as Smashwords distributes and retailers update their inventory.

I want to share some fun things with you about the book:

– One of my favorite bloggers is a genuinely nice guy with a great sense of humor – Christopher De Voss. His blog posts, and his one-liners in blog comments, tickle my funny bone. Chris is a

poker player and a zombie expert, and he recently had a story published in Undead Uncensored, an anthology from the Zombie Survival Crew.

I asked him for permission to use his name for a cameo appearance in my book under the name of Chris/Christopher De Floss. He was a peach to say yes, and he promised not to sue me. After the initial scene with Chris in chapter three, he’s mentioned six more times throughout the book, and that includes prominence in the ending. It’s pretty cool, and if you don’t think you want to wade through all of the Susan Hunter books, read this one. It stands alone just fine, and I think it will even entertain the guys. 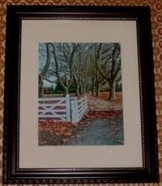 – Glenno at Erehwon, a.k.a Arnold the Armadillo, enjoys photography. I took a fancy to one of his photos, and he sent the original to me. Rich printed it, framed it, and it now hangs above my desk. I described this photo and one other (b/w with red door) as paintings in the book. They are now hanging in a fictitious art gallery on Rush Street in Chicago.

– At the last minute (truly, just a couple of hours ago), I made two small changes in the book as shout-outs to David Harding. I won’t say what they are at this time, but will wait for him to read and see if he finds them. Don’t shake your head like that. He will read the book.

I want to thank all of you, my blogging friends, who have been helpful, encouraging, and supportive while I was writing this year. It’s truly appreciated. I still can’t believe I started writing and actually published these books; it’s quite surreal. I say it all the time, because it is true: my books aren’t perfect, but they are entertaining.

Also, I do apologize for not visiting your blogs this past week. Editing has been a priority for quite a while now. I promise to be by soon to catch up with all of you. I know I missed some great posts as I watched them scroll by in my reader.

It will likely be a while before I write the next Susan Hunter book, so I want to do a little babbling about the books in general.

I like the way they have progressed. Susan manages a weight loss center by day and works and plays at a racquetball club in the evenings and on weekends. I tried to mix up the locations, characters, and stories between the books.

Sunshine Hunter – The story starts in a racquetball club in Carbide City, Ohio. The book basically starts out as chick-lit. Susan and her best friend, Darby, go to Florida, and this is where the mystery starts. There is a bit of romance, humor, and some action. The ending is back home in Carbide City at the racquetball club.

Big Apple Hunter – The pace is slower in this book. It starts as chick-lit with the setting in the weight loss center this time. There are some flashbacks in this story. I didn’t know you shouldn’t do that, but I’m a rookie author, and I’m sticking with it. Susan accompanies Darby to New York City for a weekend, and this is where the mystery starts. It is then brought back home to Carbide City and the weight loss center for the climax. Once again, there is a bit of humor, some romance, and action.

Sin City Hunter – This book moves faster, and I finally had clarity on the use of “which” vs “that” in writing. 🙂 Susan is in Las Vegas for a week of work at the corporate offices of the weight loss company. She flies out a few days early for some fun and relaxation. Her parents join her, and there is a new character introduced. Once again, we have chick-lit, a (murder) mystery, some romance, action, and I think the humor worked well in this book.

Big Easy Hunter – The book starts on a racquetball court in Carbide City, and two mysteries are quickly introduced. A character only mentioned before has a main role in this book. Susan, Darby, and the new character go to New Orleans for a wedding, where there is yet another mystery. The book ends back in Carbide City with a big climax. Chick-lit, romance, humor, action – and dogs! I love this book.

Windy City Hunter – This is the first book that has no racquetball playing in it, and there aren’t any scenes at the weight loss center. It takes place entirely in Chicago. The tone of this book is different. It’s more “pure mystery” than the others. There is a flicker of romance (hard to have romance when Mick is in England), and some humor. A new character joins the fray near the end.

I don’t know what’s next for Susan. I have an idea for one more book, but even though I feel quite certain number six will be the end, I’m learning to never say never. I also know that I may not have the final say in the matter. I’ve been to Los Angeles, and Susan just might want to go there, too.

Comment! I’m giving away five copies of Windy City Hunter and will draw the winners from the comments section! 🙂

I’ll leave you with this. I didn’t pony up the money to be able to post this little video wherever I want, but clicking the picture will take you to YouTube where you can see a little promo I put together for Windy City Hunter.